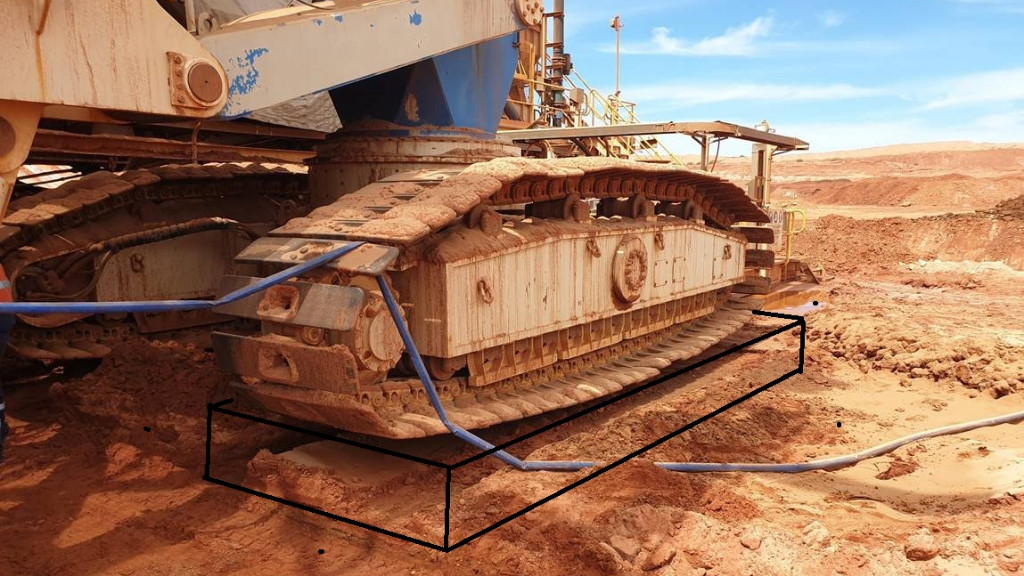 THE BACKGROUND
1300Inflate was approached by HSE Advisor at Jacinth Ambrosia Mine, Paul Freimanis, and his team. Our team was tasked with designing and sourcing an inflatable airbag that would effectively fill the void under their Mobile Unit Plant (MUP) tracks. We developed an inflatable bladder that would prevent dirt ingress and save the company from an extensive manual handling task.
The team at 1300Inflate worked with the area below the track systems of a large MUP on site. The tracks (pictured) are only lowered to ground level approximately every six weeks and this is when the build-up of extremely briny sand/slurry occurs. Before the machinery could move, the area underneath the tracks had to be cleaned out and free of sand. The tracks were then lowered to allow work to be resumed. The concept for this solution was initiated by the shovelling team who found the task arduous. The result streamlined the operation and increased efficiency.
Iluka’s Jacinth-Ambrosia operation in South Australia is the world’s largest zircon mine. The Jacinth-Ambrosia operation encompasses mining and wet concentration activities with heavy mineral concentrate and is able to create up to approximately 1000 tonnes per hour of heavy mineral concentrate, which can in turn generate up to approximately 300kt of zircon per annum.
Zircon is the main product produced from Jacinth-Ambrosia, and is used in the manufacturing of ceramics.

THE SOLUTION
1300Inflate developed an industrial-grade inflatable and temporary blasting shelter that could be set up and packed down in just several minutes. This was time and cost-effective, saving GQAir thousands of dollars. The shelter acts as a temporary blast space – it can be quickly packed up, deflated onto a pallet and rapidly redeployed when needed. Dust and pollutants would inevitably arise from blasting within the hangar, so 1300Inflate designed a fully sealed inflatable shelter with an air filtration system to ensure containment. This system allowed all dust and blast materials to be safely captured in a reusable bag that could be recycled, thus ensuring the cleanliness of the hangar. Powered blasting apparatuses are extremely loud, so noise attenuation was imperative in order to comply with workplace OH&S requirements in this confined space. 1300Inflate included an internal skin in order to reduce the noise.

THE RESULTS
1300Inflate designed a plan that matched QCAir’s specifications and closely supervised the plans before sending it off to the manufacturers. The temporary encapsulating inflatable shelter operated within the company’s workspace, saving time, labour and expenses. This solved issues that would otherwise arise with traditional encapsulation scaffolding or a solid structure internal build.
Other Case Studies 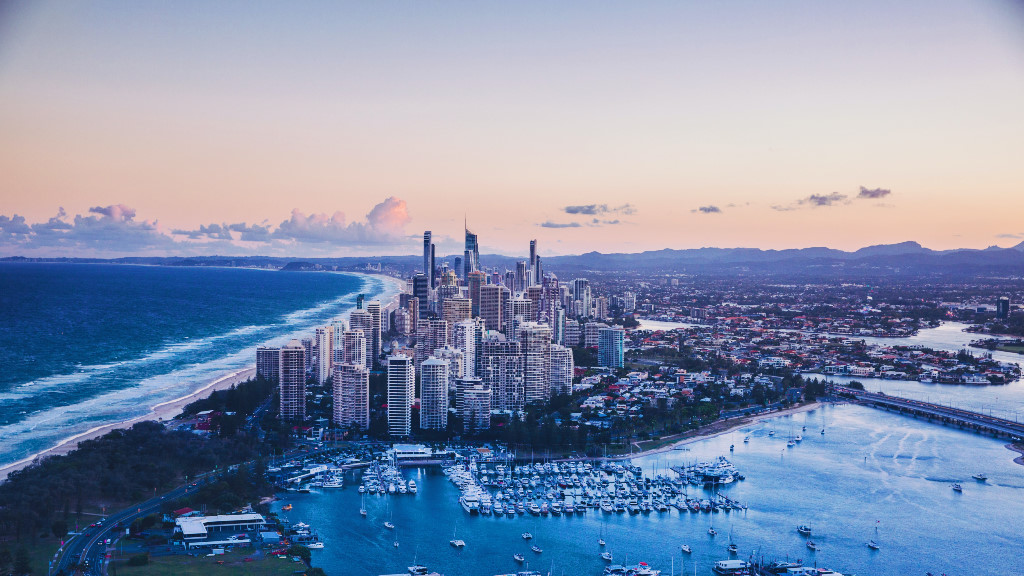 QGAir provides life-saving support aviation services to the residents of Queensland. For this project, a temporary blast booth was used inside the company’s existing hangar. 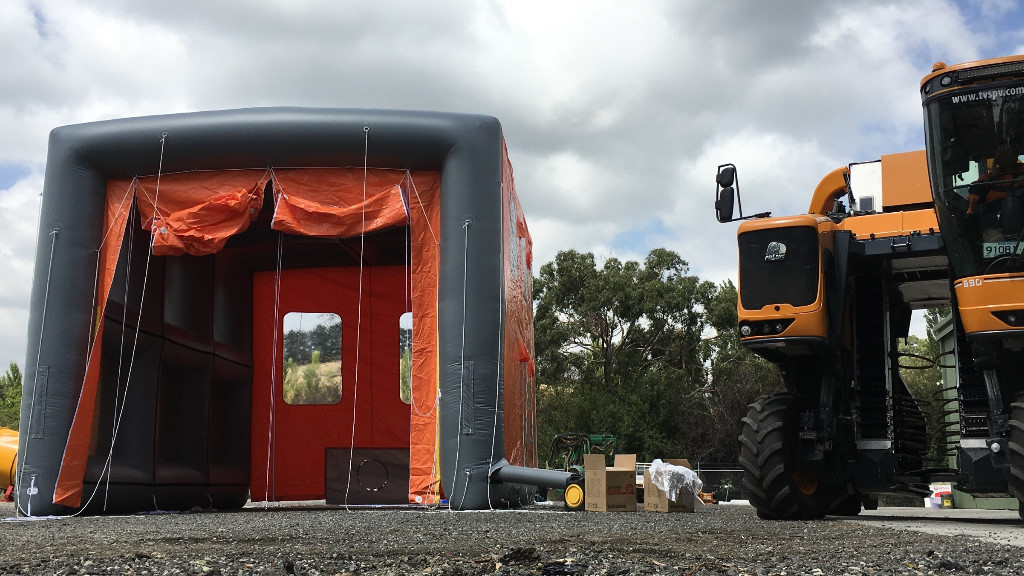 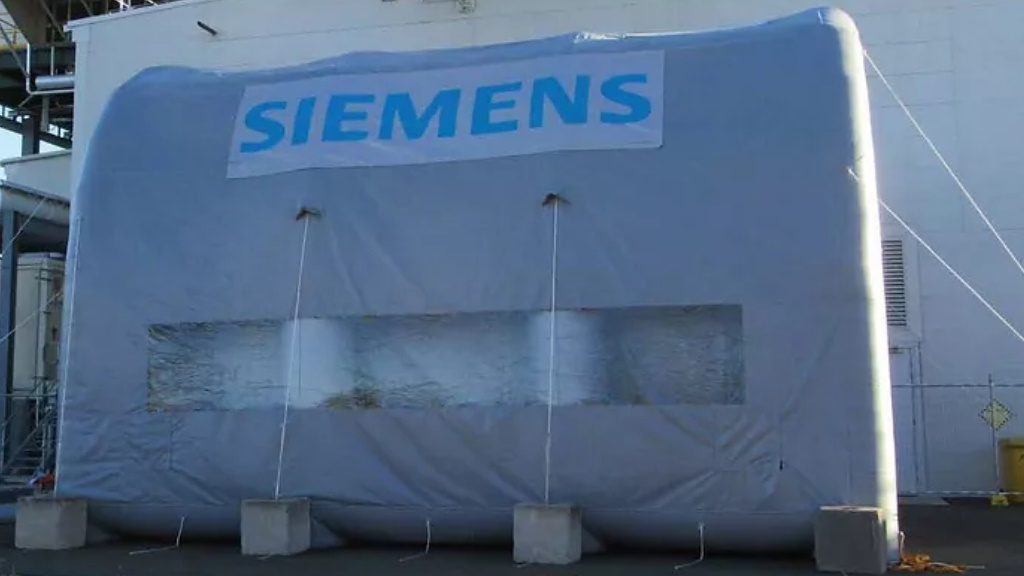 Siemens’ global operations generate a revenue of approximately €80.0 billion. With 377,000 employees worldwide, the company has been active for more than 145 years..